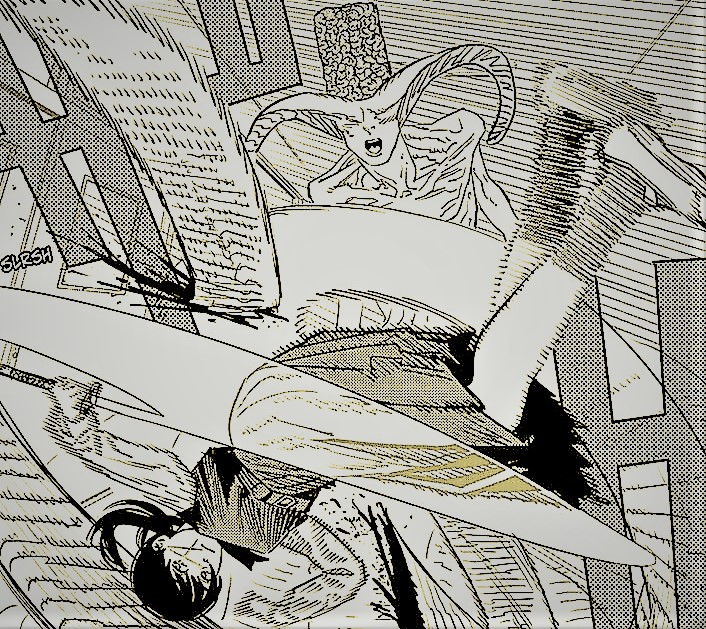 Ah, I couldn’t think of a good title this time! The first post I did for part 2 was “War, Justice And A Headless Chicken;” simply saying “War vs Justice” just felt like I took out the “Headless Chicken” part. And I couldn’t think of a clever pun for it, so……… here you go. Also, as I still have no plans to fully add this series into the “rotation(especially now that it’s going back to its weekly schedule);” I’m not gonna put a full on category for it(unless for Merchandise reasons, which you can see at our store- we just got so new merch in), so I’m just gonna put it under “Movies” cause Fujimoto does do a lot of movie references.

I haven’t covered this part of the story since it began all those months ago, so a lot has happened. But to give you a summary: The War Devil “Yoru” is out to find and defeat Chainsaw Man to get his full power back. But Asa wants nothing to do with the situation. Having no choice in the matter, Yoru has her join the Devil Hunters club to find Chainsaw Man. But her new friend, Yuko, is hurt when they find a Devil. Following that event; Asa meets Denji, who wants everyone to know he’s Chainsaw Man. He reveals his identity to Asa in an attempt to get a date, but he just comes off as a “Loser.” Asa and Yoru go to visit Yuko, who reveals that she contracted with the Justice Devil- gaining the power of telepathy, amongst other things(as we will soon see). Yuko tells Asa that she plans to correct her “Bully” problem, and tells her to stay away from school. Asa wants to stop it, but Yoru sees it as the perfect chance to bring out Chainsaw Man. The Day Of Confrontation Comes…………….

“Brief” my @$$. But you basically get the gist of it. I’m assuming you’ve been keeping up with the series, anyway. Unless you’re like me and check out the reviews and spoilers before you get to the chapter. Sometimes you just can’t wait, and others you have to do other things and don’t have the time you want to read at your leisure………………. Let’s just get on with it. Chainsaw Man Chapter 107: “School Attacker.” I fear the day when the PTA of some nowhere school finds out about this series. And with that anime now out, it’s only a matter of time…………..

Yuko transforms into a tentacled monster and starts attacking Yoru, but the Fiend leaps out of the way and starts avoiding the attack. She manages to slap Yoru into a classroom, surprising everyone. Yuko starts making her way towards Asa’s classroom, as the teacher presses the Emergency Evacuation Button. Students start flooding into the hallways, thinking it a drill. Yuko shows up to prove them wrong. Using her telepathy, she finds the one who put chicken guts in her shoe cubby and moves to kill them. Yoru comes with a Pencil trident, but it’s too weak to do any sort of damage. But they’re still strong enough to kill regular Humans.

She manages to kill 2 of the girls responsible, but the Devil Hunters Club comes to get in her way. She tries to avoid hurting the “innocent,” but they force her hand- making up an excuse that they’re “ganging up on her.” They all die, and she turns her attention back to Yoru. She knows all of her tricks; she knows that Yoru broke off pieces of the floor and claimed them for herself, and that they- along with Asa’s other belongings- are spread out in a every room of the school. Whatever plan Yoru comes up with- Yuko can see coming. Thus; Yoru is forced to use her Last Resort: The “Leave It All To Asa” Plan. She switches back, and Asa comes up with a plan- something that Yuko re~~ally doesn’t want her to do. Chainsaw Man Chapter 107 END!! Short and Too The Point- as battle chapters tend to be with this story. And it makes my job easier, so……….

I wanted to do chapter 106, but by the time I had finally gotten around to reading it- 107 was already a day or 2 away, making any theory that I would come up with……… “Mute On Arrival.” But I knew that I wanted to talk about this series 1)To capitalize On The Anime’s Popularity and 2)Because I wanted to address some of the things that I’ve seen people talking about with this portion of the series. Apparently; people weren’t very “into” Asa. Don’t know how much influence that has on a story that will happily kill off the main cast before reaching 100 chapters, but it may have “influenced” Fujimoto to bring Denji back sooner rather than later. And by that, I mean his Editor “Shihei Lin” and the “Powers That Be” at Shueisha’s Shonen Jump Editorial Staff.

People didn’t want to see Asa, I guess? They thought we were gonna get immediate follow up with Denji(as did I), so seeing her was a bit “jarring,” right? Or maybe it was that people didn’t like her initial behavior? I didn’t have these problems; I was perfectly entertained, especially with that initial chapter’s ending. Though I did note that Asa and Denji’s parallelism was a little more “traditional” than what I came to expect from the series. If it were a traditional Battle Shonen(or even a Regular one), then Denji would say something that got through to Aki and have saved him, while Aki gets to keep the power of the Gun Devil.  Power wouldn’t have submitted to Makima like that and then save Denji; she would have told Makima to “shove it” and saved him from the get go. Denji wouldn’t have killed and eaten Makima; he would have captured her and “talked to her” to reach some sort of agreement. None Of Those Things Ever Happened.

I watched a video a few months back- “Demon Slayer and Chainsaw Man: Two Opposing Forces – Shonen Theory” by NinjaMushi. He put both series in separate categories; Demon Slayer was an “Adaptor-” a story that doesn’t necessarily “break the mold” of Shonen storytelling, but tries to introduce the same concepts coined by series like Dragon Ball, One Piece, Naruto, and Bleach in new ways. Whereas “Chainsaw Man” is an “Innovator-” a story that takes those same tropes from those same series, and either “progresses them to their narrative conclusions,” or “turns them on their head.” Dumb Optimist Boy; Boy With Tragic Life Story; Older Character Who’s Seen it All Before; Girl:

When you look at it like that; I think what people didn’t like about the opening of Part 2 was how “traditional” it was in comparison to Part 1. It did some things you would expect from a series trying to be “The Next Naruto/Bleach/One Piece/ Dragon Ball/ Demon Slayer,” right down to giving her an “Inner Demon” that she doesn’t get along with. Jujutsu Kaisen is another “Adaptor” of that same trope, but whereas Asa and Yoru are clearly meant to grow closer and closer- Yuji will NEVER befriend his “Kurama.” That would make it an “Innovator,” though, wouldn’t it- that part of the video kind of contradicted itself and rendered the topic “mute.” At least, according to someone I know………………

Even now; I’m kind of seeing what Fujimoto is going for: When Asa’s life was down; Yuko came in with kindness. And as far as she knows; this is still Yuko being kind- just taking it WAY TOO FAR. This is her Friend– the only way she sees at the moment, as Yoru is still acting on “whims” and causing her social and moral trouble. And Denji is going to come in and kill this b!tch. Fujimoto can either A)Have Denji show up and become Chainsaw Man in front of them both, revealing his identity, or B)Show up as Chainsaw Man, fight and kill Yuko, and “time out” in front of Asa. Either way; the end result is that Asa and Yoru are going to figure out that Denji is Chainsaw Man- the one responsible for killing Yuko. She already didn’t like Denji, shown in chapters 104 and 105– he came off like this “Womanizer” who’d say anything to get a girlfriend. Which he kind of is. But when she finds out that HE’S the one who killed Yuko- they rumblin’.

And that’s not even to talk about what Yuko said in chapter 106– how she wants to be like Chainsaw Man and save Asa. This is still “Chainsaw Man,” people- I doubt that Yuko is such a “Good Person” that she’s dealing with Asa’s bullies just to “save” her. That honestly just seems more like an “excuse” than anything; she just wants to be a “Hero” and doesn’t really know what it takes to be one- on some My Hero Academia type sh!t. That could either be something she says before Denji kills her, in which her final words will be something like “Live……. Asa……” OR she could end u blaming Chainsaw Man/Denji for “making Asa think like this.” It’s more than likely gonna be that first one.

But then you have that organization that Yoshida works for- the one that’s trying to make sure that Denji leads a “Normal Life.” And that means preventing anyone from figuring out Denji’s secret, much to the boy’s chagrin. They’re probably more than willing to kill anyone who finds out, if need be. Whose to say they haven’t done so already? There was a bit of time gap between the end of Part 1 and start of Part 2; Denji was active that whole time- probably trying to get people to figure out his identity. Just sayin’. Because Asa has just gained the resolve to “live more selfishly.” She doesn’t want to die- or go into hiding or something akin to that. But this organization won’t let her find out and continue like nothing happened- especially since they now know that she’s playing “Host” to one of the Four Horsemen Devils. This is honestly the worst possible situation for Asa to be in– and she’ll be saying “It’s All Chainsaw Man’s Fault” by the end of it.

WOAH!!!!!! ALL THAT IN ONE TAKE, B!TCHES!!! No breaks or anything– I managed to say everything that I wanted to the minute it came into my head!! I tend to do my best work through “Momentum-“ at least I feel like I do. Now the only thing that’s left to do is figure out when I’m gonna post this thing. You’re probably reading this once I’ve figured that out. I try to give each of my posts some time between each other- at least a full day before posting my next one. And I started working on this one after the Edens Zero review. But my sites been acting up and deleting the progress of my posts. So I may have just posted it as soon as I finished this ending. Whichever one I end up going with; let me know your own thoughts in the comments. And until the next post, everyone- Have A Magically Wonderful Day, Folks. By~~~~e!!!!!!! 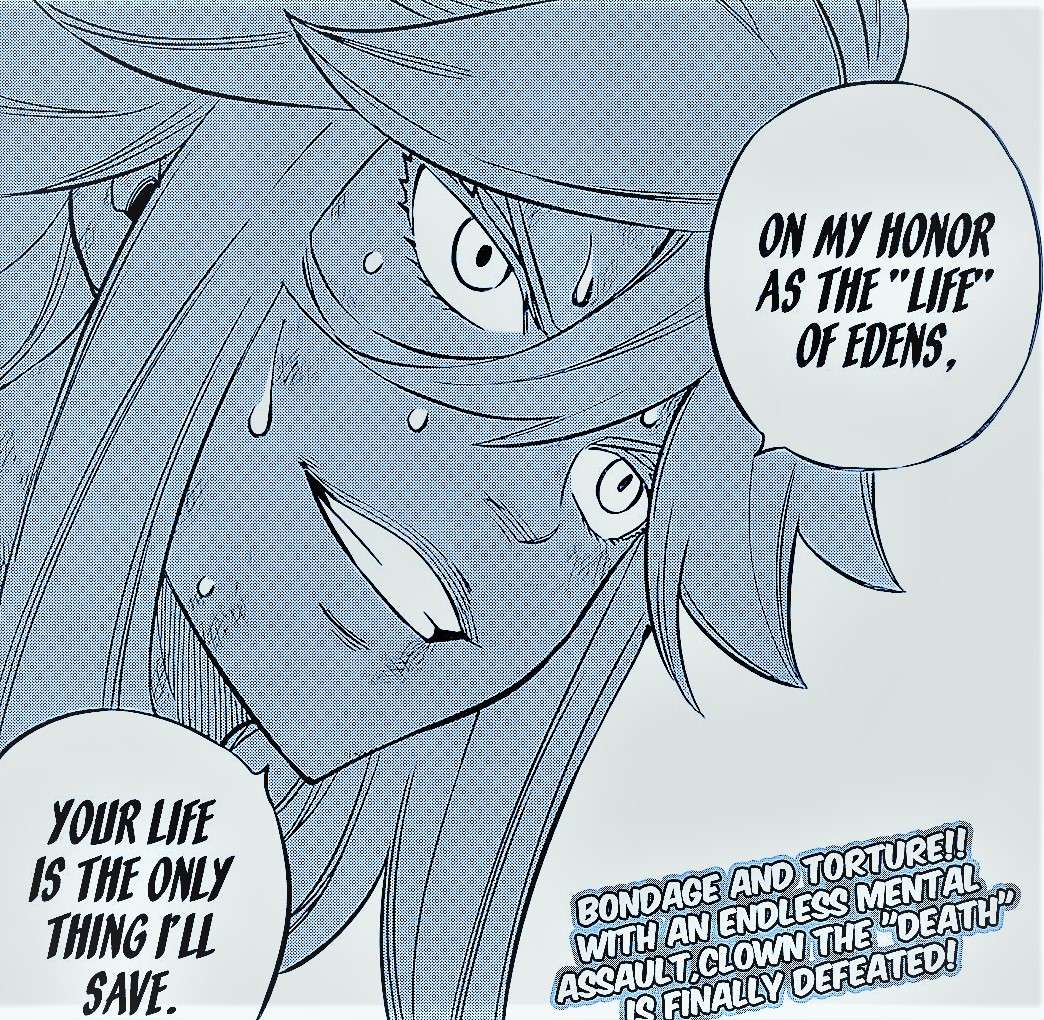 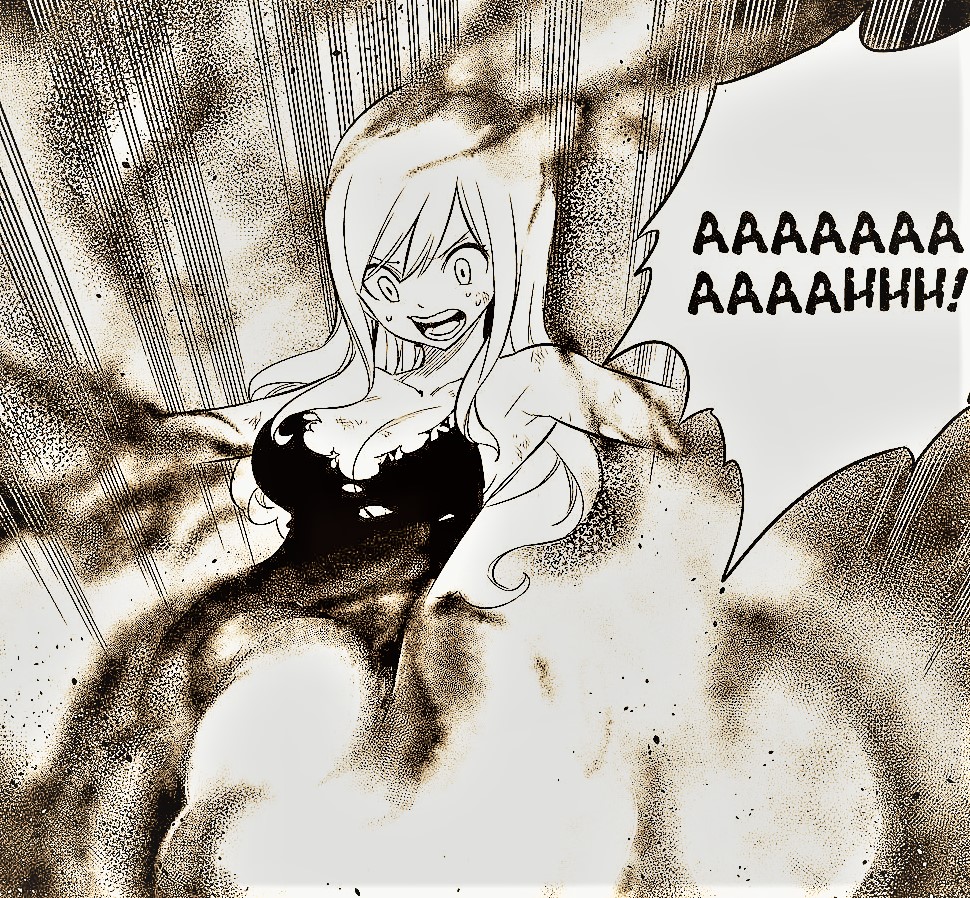 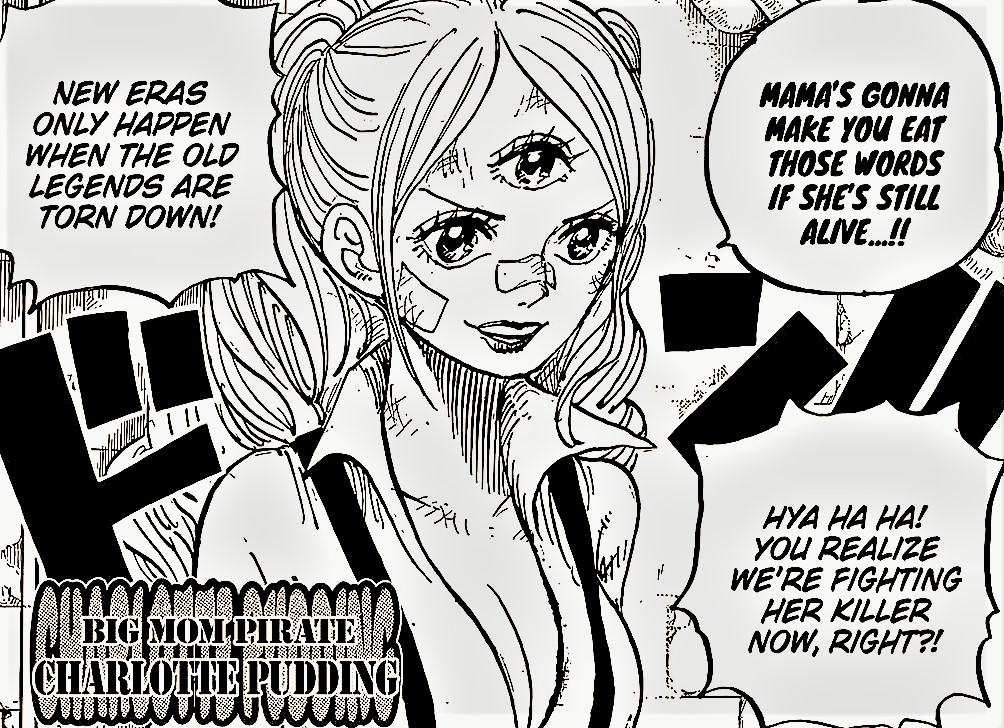 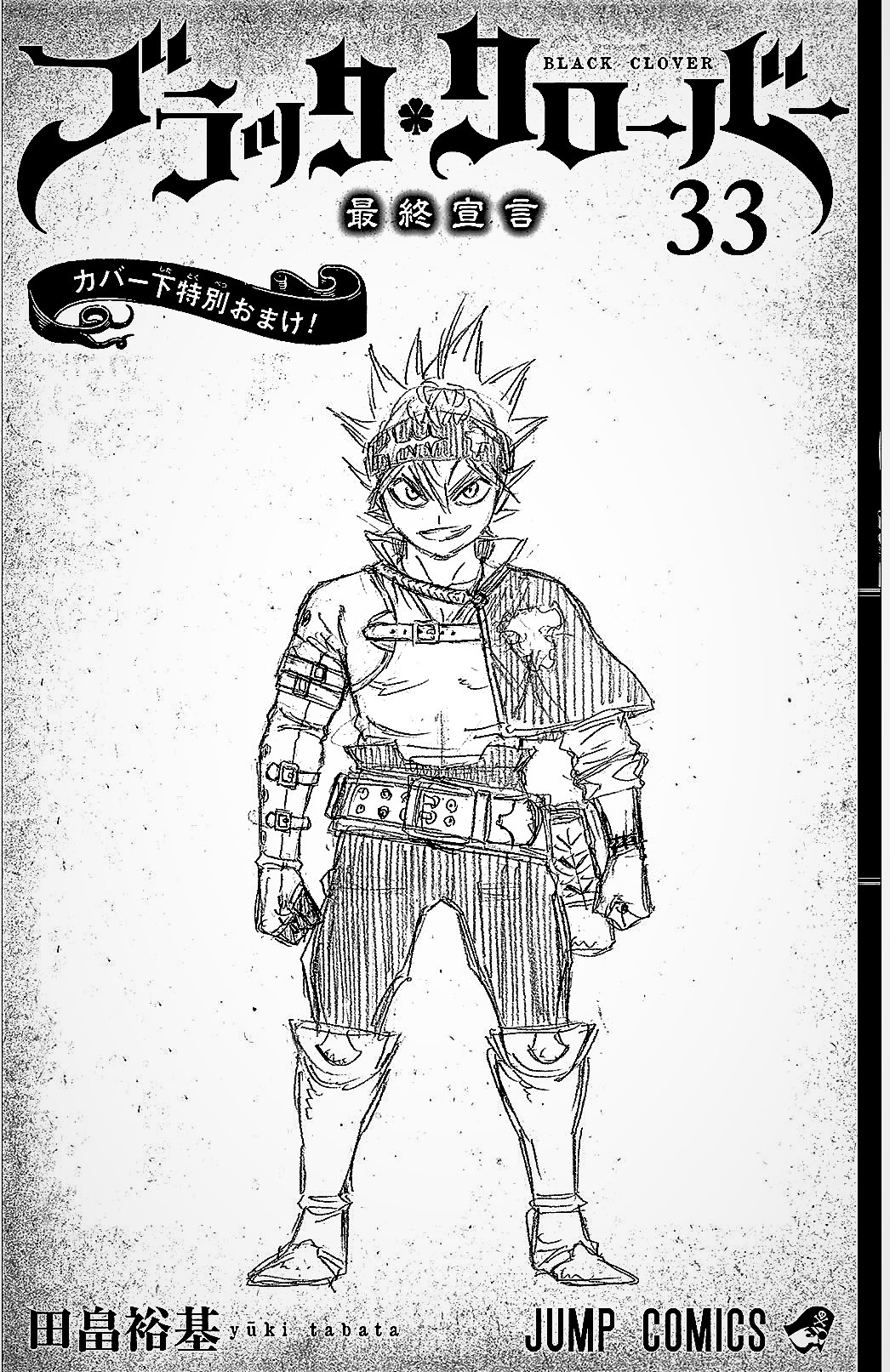