Man, how long has it been since we last talked about the “Dragon Ball Super” manga? Chapter 83? I mean; this is a Monthly manga, and that was only 2 months ago, but I feel like too much time goes by before I can talk about my favorite series! Though there’s a bit more of reason for that other than “Lack of Time.” This chapter is an example of that. Which may prove to be revealing of my feelings towards the story.

Also, for first time readers: 1)Hi and 2)I already know the Full Spoilers For “Dragon Ball Super: Super Hero.” Because I’m “Me.” I know all that goes on in that movie- about Piccolo; Gohan; Vomi; Dr Hedo and the Gamma’s- Got It All. So if you WANT to talk about them in the comments, then we can. And for those who want to AVOID spoilers for the movie- Get Off The Internet. You will not escape them. And now; the chapter! Dragon Ball Super Chapter 85: “To Each His Own Answer.” Let’s begin.

In the last chapter- chapter 84– Goku and Vegeta continue their battle against Gas. It almost destroys the nearby Sugarian settlement, but Goku takes care of that while Vegeta continues getting battered around by Gas. But he gets up, telling Gas that he “becomes stronger the more he’s hit,” thanks to Ultra Ego. Thus this chapter, in which we begin seeing Gas smack Vegeta around some more despite hearing seconds ago that it would only make him stronger. And so Vegeta manages to land a significant kick in his gut.

Gas displays an interesting use for Instant Transmission by using it to move Vegeta around the battlefield(which was a pretty cool idea, honestly). Goku tries to jump in, but Vegeta’s “Ego” starts to show as his Ultra Ego evolves- while Kakarot’s Ultra Instinct is no stronger now than it was against Granolah earlier. So he tells Kakarot to “figure it out,” while he continues to battle Gas. He takes the advice to heart, and begins to focus……………..

The battle continues, and despite the damage=power buff; Vegeta is still no match fo Gas. Though that’s more due to the fact that he needs actual DAMAGE to grow stronger- damage that is meant to kill him each and every time it connects. He may be getting stronger, but he’s also taking too much damage to keep going, and ultimately loses consciousness.

Gas takes this as an opportunity the end Vegeta’s life, but Goku intervenes with a protective barrier. He levitates Vegeta over to him, and continues to meditate until he finds the answer to his problem. The Answer– for better and worse: Ultra Instinct-Sign-. ‘Cause it “works better for his emotions.” And with his heart full of Saiyan pride; his heart’s anything BUT calm! But to Gas; this triggers his PTSD, as all he sees is Bardock looking at him all over again. The irritated Heeter moves in to wipe that look away, but the resulting collision ends with Goku knocking off one of his tusks- while also getting knicked himself.

From there; Goku begins to overwhelm Gas- so much so that the resulting outbursts of ki force the other Heeters to flee from their ship. It becomes clear to Goku that he’s “barely stronger” than Gas now- but he’s on limited time. He has to end this Here And Now.

Gas refuses to let Goku win, and hurls a barrage of ki weapons at him with all he’s got. Goku manages to evade all of it, and even uses the wrecking ball he made against him. And with him distracted catching it, Goku as able to move around and plant his foot FIRMLY in Gas’ abdomen- sending him far away. The Heeter’s look on with panic before they notice: Elec’s Gone. He went to talk to Gas.

Elec reminds Gas of their top priority: To Become The Top Organization In The Universe. And for that; Gas has to kill Frieza. But he’ll have to get past these Saiyan’s first- even if it kills him. Goku tells him to calm down; they’d be happy to fight Gas again any time. But Elec says that “Gas doesn’t have a ‘next time.'” Gas begins to power up………. with a catch. The Backlash of Elec’s wish will be made clear- NEXT TIME on Dragon Ball Super!! You like the reference?

If the -Sign- version is “better for his emotions,” then he shouldn’t have tried to Master it so soon. I’m sorry, but I needed to say that; that is genuinely p!ss poor writing. How is he doing BETTER in a lower form? I’ve always felt that Goku gaining access to Mastered Ultra Instinct fully was a bad idea, and this chapter proves my point. And then it didn’t even do what “Ultra Instinct” is supposed to; Goku looked like he was actually trying to dodge Gas’ attacks, rather than letting his body do it. The whole point of this technique(that has been made a form) is to allow the user to fight while also coming up with a strategy. Maybe I didn’t read that scen right; maybe Goku’s body was reacting like it did in the anime and thought of using it there. Heh; comparing the manga to the anime- my argument just went out the window.

So what now; are we just gonna have Goku use Mastered UI when his “hearts not in it” and he has to end the fight, while using -Sign- when he wants to enjoy himself? ‘Cause we’ll be seeing a LOT more of -Sign- going forward! WHICH PROVES MY POINT AT THE BEGINNING!!! Then again; it doesn’t seem like they know how to write Goku anymore. We might just see MUI again SOON.

And then you have Ultra Ego. WHAT? I mean; OBVIOUSLY he wouldn’t be able to take all that damage and still keep going. No matter how strong you’re becoming; damage piles up, and eventually you’ll succumb to it. That made sense. The problem is that this transformation’s WHOLE DEAL is letting Vegeta fight like he wants and become stronger. But how is he gonna get stronger if he can’t withstand the damage that’s making him stronger? I almost want to think that this will lead Vegeta to learning some kind of technique that will help him subside that drawback, but………………. where would he even learn something like that? Would he even go for something like that? That form seems to have the marked effect of leaving Vegeta……………. mildly unhinged. So any technique that would that level of concentration to maintain in a fight would be rendered inert. So how the f*ck do you deal with this weakness. Please tell me they have a plan for this? Let me believe a lie!!

……………………………… Might be ripping into this chapter a bit too much. Since I couldn’t properly explain what the “ultra Instinct” problem was; maybe I should lay off em……….. a little bit. For now; I’ll focus on some of the Good of the chapter. That being Elec. MasakoX had this long standing theory that Elec would betray Gas’ trust and use his devotion to make him throw his life away, and that Oil and Maki would take a problem with that. He ended up being right; just a few months off with when it would happen. Though that’s not his fault; this arc is REALLY dragging its feet.

As for where this is going to go for the story…………. Gas might just die here. Which would kind of mess up their whole plan to have him take out Frieza. Or……….. does it? You can all probably gather where I’m going to take this idea. And it goes all the way back to the beginning mcguffin of the arc: OG73-i. If he was just a “segway” piece to tie this and the Moro arc together, then they could have done something else. I definitely still think that there is a reason that 73 was brought into this arc………….. despite how much this arc and series in general have let me down. Still Hopeful!! In any case; yeah, I think 73 is going to come into play.

Elec said he had “other business” in chapter 79, which is why he didn’t come to watch Gas fight Granolah. Toyotaro is trying to play the “Long con” by holding off on plot points like that(to……. “varying” degrees of success), but I think that these moments are going to have pay off sooner rather than later. Perhaps Elec had to reprogram 73 to obey his commands, and is about to have him copy Gas’ power at his absolute max. Which is why he’s pushing Gas so far; he wants the absolute Strongest version of 73- the strength of a warrior that can defeat Frieza, and an endless supply of stamina. I still say they could have gotten the same effect out of using the Dragon Balls to fuse Gas and 73 cause he should already be his strongest self after the whole deal with Moro, but then I’m not the one writing the story.

This would also work out well in service of characterizing Elec; he didn’t want a “Loyal Family-” he wanted a group of machines to do his bidding. Something that Oil and Maki seem to be picking up on………………..

………………… Fine? Okay chapter. I mean; as far as “Super” goes. “-Sign- being better for one’s emotions” makes sense I guess, but if he was losing with a stronger form and the full version of the technique, then why even bother letting him get control of it? Ultra Ego’s main gimmick is held back by the limits of…………. Biology? That’s just how things work. I like Gas’ now state, I guess. But…………. I don’t know, man. I’m never gonna abandon this series, but I’m gonna stop getting my hopes up.

That’s all I got for you guys today. Let me know your own thoughts in the comments. And until the next post guys; I hope you’re having a better day than I am. Later….. 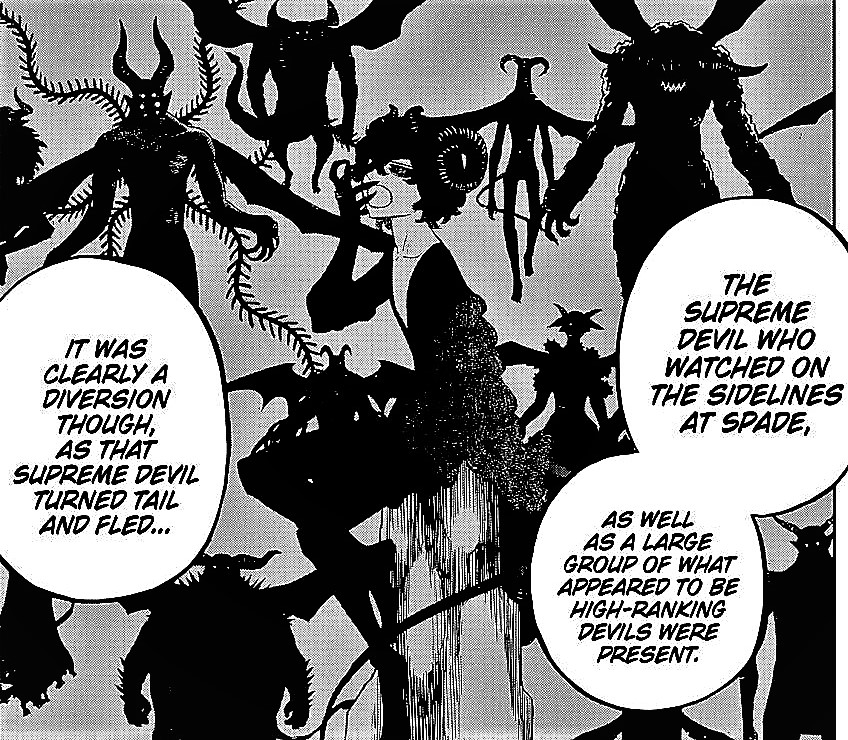 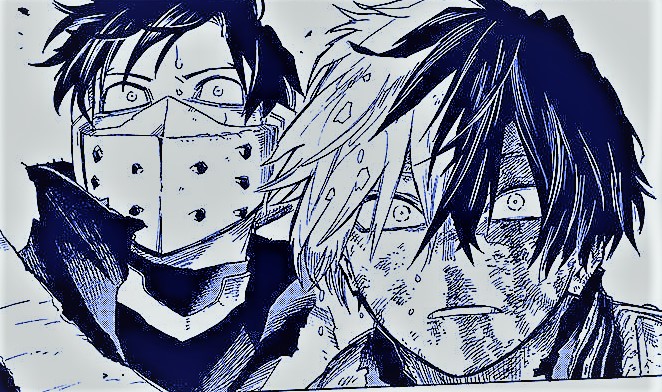