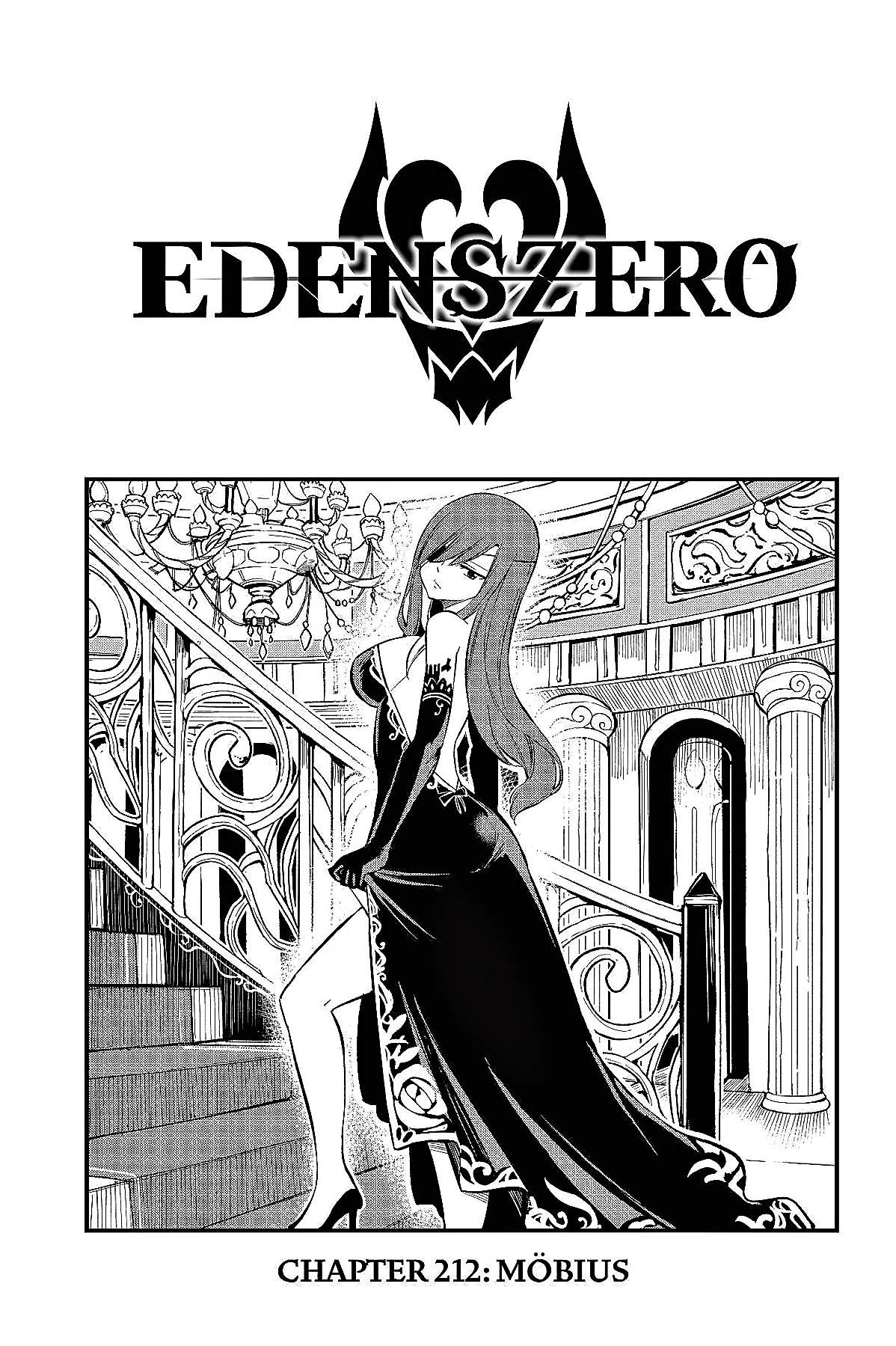 …………….. It’s like; Cool, but if you were just gonna end up doing this, then……………. WHY? You know what I mean? I don’t know what Mashima’s trying to do with this arc- what his overall plan is for the series after the Lendard arc, or what this arc means for the story as a whole. It’s certainly trying to BE important, but the exposition is starting to get a bit “clunky” and “for the sake of it.” And what’s more; I don’t really know how close this arc is to ending- it’s not giving me any indication that we’re done yet. Why am I saying this NOW, you’re probably wondering. I want to get into the problems quick, cause my hours at work are going back up, and……….. things are moving. Things I can’t avoid. So my time might end up a little more limited. Which sucks cause it just started to free up again. Oh well. Let’s just get to it; Edens Zero Chapter 212: “Mobius.” There’s those 2 dots over the “O” there….

Picking up from last time: Hermit is looking through Elsie’s medical records from her time on the ship. She sees all the physical injuries she got from the Collapse Of Lendard, but she’s looking for something in specific- something she said on that day that Hermit’s only thinking about now……..

We then cut over to Justice and Homura’s struggle against Acnoella’s Dragon horde. Even using her strongest “Odin Strike;” Homura is only able to take out 1 Dragon of the THOUSANDS swarming the skies of Lendard. All the while Justice can’t even get close to Acnoella. Also, Acnoella’s Overdrives. He manages to get to her, but she blocks his attack. But he asks her how she’s able to create so many Dragons. She blows him away, and explains that she creates them right here on Lendard thanks to the Final, Greatest Invention Of The Kingdom Of Lendard: The Perpetual Mecha-Soldier Birthing Machine- Mobius. Note: Not ALL Dragons come from here- nests like “Dragon Falls” have existed since Time Immemorial.

Justice says that that project was was halted, but Acnoella says that construction continued in private- with HER at the helm. Elsie’s little “Rebellion” did little more than halt the project. Justice is surprised to learn that she’s a Lendardian, and Acnoella has her Dragon blast Justice. But Homura uses her Knight Gear to obstruct the blast. They are sent to the ground. Acnoella then begins here Evil Monologue:

I Have No Use For Human Children- They Are Nothing But Trouble. I Prefer Machines- All Of Them…… Listen To Their Mother. I Am The Mother Of Dragons!! I Have Forsaken My Human Form And Become A God!!!

I Have Laid Waste To Countless Planets- Countless People! With The Overwhelming Power Of My Dragons!! What Should I Care For The Human Realm?! As Long As I Have My Children….. My Dragons….. I Will Always Be A Mother.

Now…. The Festival Of Chaos Has Only Just Begun. This Universe Will Belong To Us!! I Want More Blood…. More Flesh…. A Shining Crown Of Glory For Lendard!!!

– Acnoella “The Mother Of Dragons

When she says this, Justice immediately realizes who she is: Elsie’s Mother, Shaya Le Lendard. But before she can confirm this herself………

Elsie arrives and cuts Acnoella in 2. And to make sure that the Android is no more, she goes out of her way to use “Grand Chariot” to destroy her. Even knowing this this was her own Mother. With Acnoella now gone- she can claim the Mobius for herself. Edens Zero Chapter 212 END!! Okay, WHAT?

Like I said in the beginning: I don’t know what Mashima is trying to do. The reveals in this arc are so “back to back” that nothing really has time to “settle.” And with this; this was not hinted at at first; we knew nothing about Acnoella before hand; she didn’t even have a scene in which she and Elsie interacted. It’s like Mashima just made Acnoella her Mother for the sake of the ending; “Elsie’s The Villain Justice Thinks She Is!! She Even Killed Her Own Mother Who Just Went On A Monologue About Destroying Planet After Planet!!” Now what I will say is that this reveal characterizes her a little more; that monologue now rings to me as a “Mother Who Feels betrayed.” She felt such betrayal from Elsie that she abandoned the idea of having a “Human Daughter” in favor of “children she could program.” So that’s something.

And as far as Elsie being the “Big Evil” that Ziggy was talking about; I’m not entirely sure about that. I’ve been seeing theory after theory that she has mechanical eye like Shiki does, and the “True Enemy” is using that to corrupt her. I don’t think so. I honestly think that she rejected getting an artificial eye- as some kind of “reminder of her past;” some small way to atone for what happened, and to make sure that “never forgets where she came from.” Otherwise, what would be the point of the eyepatch?

I don’t know what’s going on behind the scenes, but it’s clear that somethings very wrong. On the one hand; you have the simple fact that Mashima- is spreading himself thin. He’s got a Youtube channel; he does those “Twitter Spaces” every week; he’s working on this, doing storyboards for Fairy Tail: 100 Years Quest, has a helping hand in BOTH anime while also working on a 3RD anime project UNRELATED from both; and he’s been getting into game design, having made 1 or 2 mobile games so far. This man keeps busy. But that’s not always a Good thing. He’s “burning the candle at both ends” with all these projects. Eventually, something would have to give. And it looks like “Edens Zero” is the one that’s getting the short end of the stick- it and 100 Years Quest, cause I’m not hearing a lot of Good things about a recent event. Then again, it sounded kind of “forced.”

It may also be that Mashima is trying to “hurry it up.” Like; he said in a recent Space(I believe it was) that he said that he only intended this story to be 100 chapters, and that it……… only has like 2 or 3 years of story left. And, in the lead up towards the anime; he also said that he’s already workshopping some ideas for his “4th work.” This is all telegraphing to me: He may rushing through the story. Because even in arcs like Foresta or the Aoi War, where several storylines were going on; Mashima still managed to balance everything, set up what’s next, and wrap up that arcs overarching story in a satisfactory way(Aoi was a little off, though). But I can’t even tell if this arc is reaching it’s conclusion, or what comes after this. I hope Mashima can do a little “course correction” after this.

As for the story itself– what’s going on in the context of the manga; I don’t know what all of this is leading to, either. So far, we’ve had 2 Galactica taken out, 2 to 3 names cleared(depending on how Elsie comes out of this, and what happens with Shiki and Nox’ staus’ as Galactica) and Ziggy potentially being destroyed. The Oracion Seis Galactica is essentially defunct. Which REALLY sucks cause we don’t get to see the full ramifications of Shiki being inserted into their ranks. I know it would be a little too “One Piece” for everyone, but the Galactica are effectively Yonko in the context of the story. Shiki Became a YONKO, People!! If this were One Piece; we’d be seeing how the world reacts to that information as we speak! Not only that, but Shiki is now the FIRST of Mashima’s protagonists to ever have joined this faction- willingly or otherwise.

And like I said; his position may not even last long. There’s my personal idea that he will join Interstelar, meaning he still gets to be a member of the Oracion Seis, but also- now that Cure’s plans have been revealed- a Prayer council might need to be held(in person, this time) on whether to leave Nox and Shiki in Galactica. Which they probably won’t. Though now they might actually have to take Elsie seriously, as opposed to before when she was simply Justice’s obsession. But even THAT depends on how she comes out of this arc!! But for the sake of discussion; let’s say she comes out the villain- the Final Full Fledged Galactica. While Interstelar still has an opening from 3 years ago(Jaguar’s spot) and Cure’s seat is now open. I definitely think that Shiki will take a slot, but will Nox?

And then you have Mobius. What does Evil Elsie plan to do with it? If the “True Enemy” reprogramed Ziggy to think “Machines Over Humans,” then we would assume that they’re a machine that wants to ensure the future Ziggy comes from- possibly even the one who caused that to happen. But Elsie’s human. But it’s possible that she has cybernetics other than an eye. What do you suppose would happen when a little girl finds out her Kingdom is making such a dangerous weapon?That they’d let her escape to tell everyone about it? Or that they captured her, conducted a few experiments on her, and she broke free- but she’s starting to get infected with a Human hating Virus? Something to that effect. Mashima keeps coming back to the “Human Hating Virus” for machines- it’s how they got Shiki off of Granbell in chapter 1; Ziggy was reprogramed to hate Humans; maybe Elsie’s augmented a hates humans now, too. And the “True Enemy” made it because they hate humans. Possibly.

I’m just trying to think of what would make Elsie act like this. Last chapter, she was crying over the people closest to her dying 1 after another. And now we have her actual Mother- one of the people she was mourning last time- getting chopped in half. What caused this switch? And what in the past did she say that’s making Hermit curious? WHAT THE H#LL IS GOING ON? I’d make a joke about us finding out next week- in response to the fast pacing and “dumping” of the reveals, but that just feels unnecessary.

Yeah, guys; I’m not the biggest fan of this arc right now. I think it had a strong start, but I’m not enjoying what’s been going on as of late. The pacing’s wacky; some of the reveals could have waited; others were just kind of unnecessary. I don’t know why Mashima is trying to speed up the story, but I hope we slow down a little bit going into the next arc. They still have to find a whole bunch of Relics to find Mother! We also need to hear about Rebecca’s origins, which I feel should be 3 chapters at least. But that’s just me. Let me know your own thoughts in the comments. And until the next post, duckies- Have A Magically Wonderful Rest Of Your Day. By~~~~~e!!!!!!! 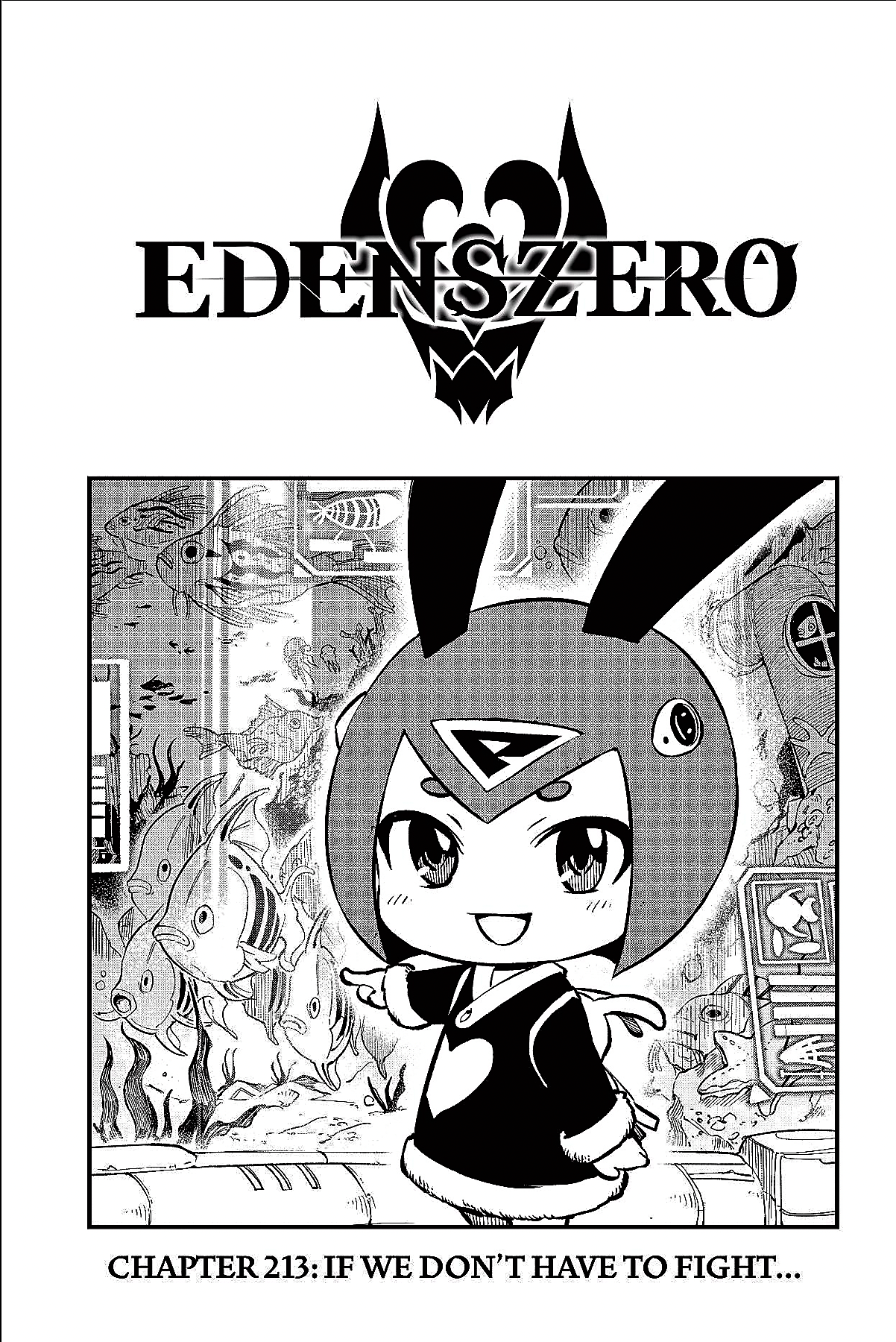 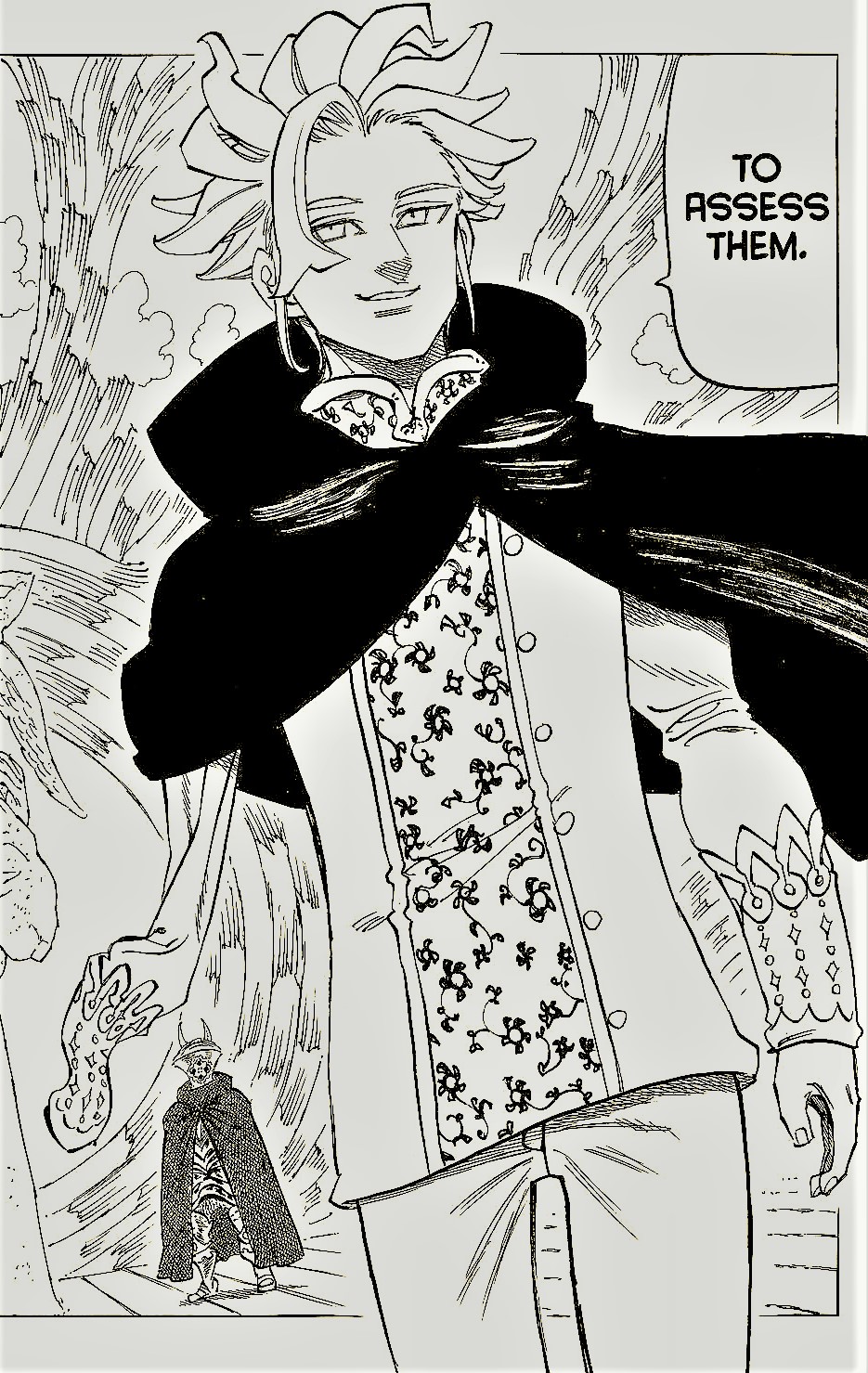 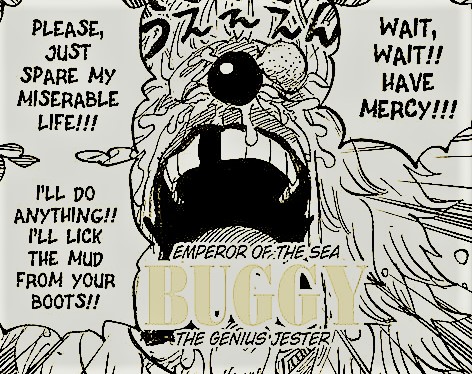 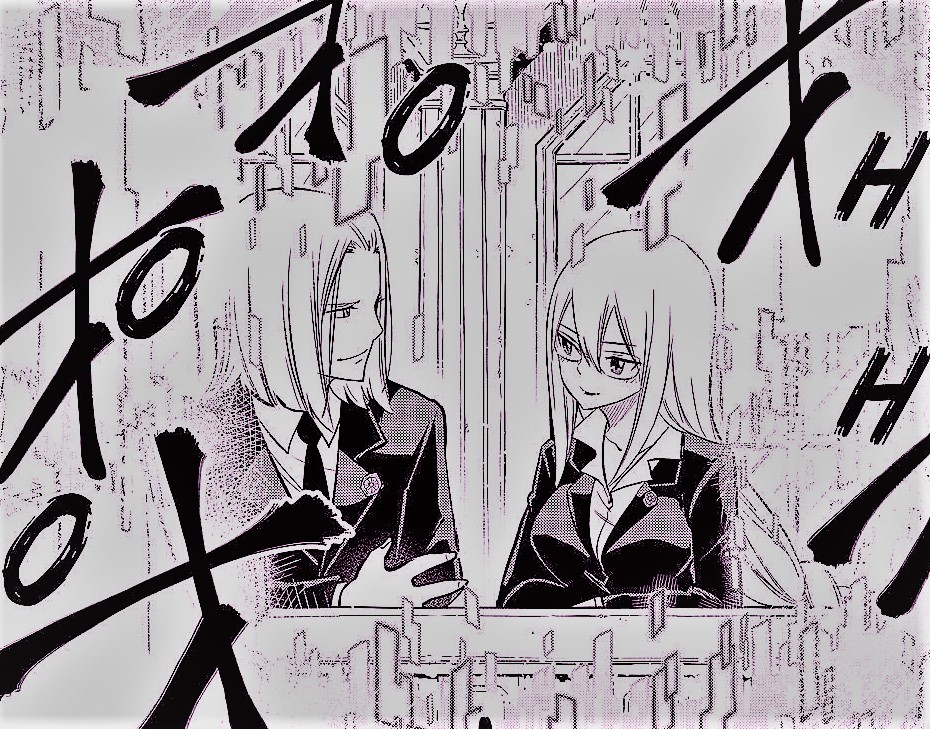