………………. What do I say about this that I haven’t said already? Suzuki sensei knows how to write compelling, “real” characters!! And he knows how to keep them all relevant without overpowering them or anything. It’s like; I don’t think the “Star” of this chapter is ever going to be on the same level powerwise as the titular 4, but it’s not like the characters that the Main character has been travelling with for over 50 chapters are just gonna “go away” or anything like that. There’s also something I want to talk about with Percival, but I don’t think anything in this chapter would facilitate that. We’ll…… We’ll see how things shake out. Four Knights Of The Apocalypse Chapter 73: “The Demon Melagaland.” I mean, I prefer “Galascula,” but you know, it’s whatever. 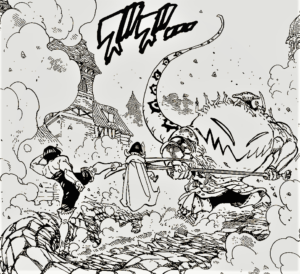 We open with Percival and the others in combat with the merged Chaos “Melagaland” as they name themselves. Percival and Gawain keep the monster’s attention so that Tristan can bring down his strongest attack. But when the dust settles; all they see is that Chaos Melagaland is much faster than they thought, as it dodged every blast.

The beast vows to bring destruction upon all those who oppose King Arthur, but Percival refuses to let that happen, and leaps head first into battle. Not a single attack lands- Melgaland has some kind of magic that’s making it untouchable, or maybe they’re just crazy wicked stupid fast. Donny says that they just need to “aim better,” but Nasiens quickly reminds him what they’re up against right now. Percival gets captured, and is about to get cleaved in 2.

Gawain tells everyone to step back 100 ft, and unleashes the attack “Sunshine Burst-” an AOE attack that burns everything around Melagaland. The heat makes the monster let go of Percival, and Tristan dives in to save the boy. Melagaland tries to recapture him, but timely intervention from Donny sends Melagaland into the sky, and several feet in the opposite direction.

onny spent up most of his magic. And unfortunately- So Has Gawain. So he stops and goes to sleep. Thus; Four Knights Of The Apocalypse Chapter 73 END!! That was quicker than I thought.

This chapter was……………… quick. It was just more fighting, but it also showed us that Donny and those other guys aren’t just gonna “fade” into the background. It’s why I titled this chapter review the way I did: Donny and the others may not end up being quite as important and Tristan, Gawain, and certainly not Lance, but they’re still going to be part of the story- at Percival’s side as more than just “living batteries” for his magic. They’re still going to be relevant, as Donny showed here.

It’s something that I was sort of afraid of as we got that God Tier double page all the way back in chapter 61. I was kind of afraid of Donny, Nasiens, and Anne just “fading away” and being relegated to spectators. It’s something that certain other manga end up doing when they ironically start to expand the cast; certain ones end up at the “front” while the rest just stay around to react to the fights- explain the “Oh Sh!t” moments- carry healing items or be healers- or be “emotional anchors” for rage moments. You get the 2 that I’m referencing, right? I don’t want them to end up like that, and I’m glad Suzuki is going to try and keep them in it. 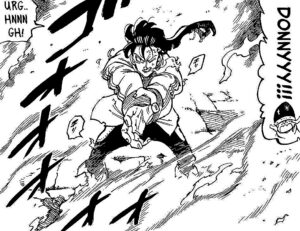 Other than that; there really isn’t anything to talk about. It was a continuation of the fight against Melagaland, teasing a few ideas for the rest of the fight- which will be continuing in the next chapter, based on the title. And I mean, that’s fine. But I’m not super invested in this fight right now. Once the initial “Oh Sh!t He Revived The Commandments!!” dies down; it’s just Melascula and Galland. I like em, but in moderation. They can go now. Before they end up overstaying their welcome…………..

“Short And Sweet-” Pretty Much The Motto At The Moment, huh? Between this, Black Clover, and Edens Zero- I blowing through the post WAY faster than I though I would. Now when it comes to the monthly chapters and the reviews for “Dragon Ball Super’s” movie and most recent arc- THEN I’m gonna be a minute. This is gonna be a long one, huh? Oh well; “Quality Over Quantity” is the name of the game now!! Which we’ll get to later. 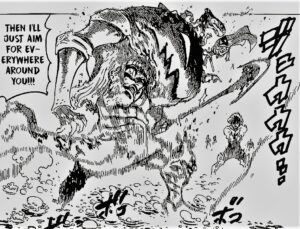 In any case; that’s all I got for the lot of you today, boys and girls. Let me know your own thoughts in the comments, and until the next post, duckies- Have A Magically Wonderful Day. By~~~~~~~~e!!!!

Comment (1) on “And Donny’s Still In It, Too. Four Knights Of The Apocalypse Chapter 73 BREAKDOWN”