Ziggy Is Shiki From The Future– End. Of. Discussion. The theory is confirmed and there is no longer a reason to debate- This is a thing. Also: I ended up being right again. Though it just became pretty obvious after thinking about it for a minute. In any case; other things happen- for better or worse. But I don’t mean that the content was “bad” or anything like that. You’ll see what I mean. Edens Zero Chapter 203: “Ziggy.” Honesty. 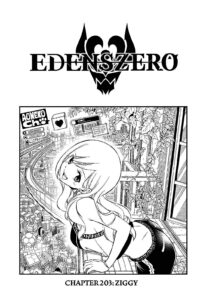 Dealing with some new editing software(?), so this may not come out as “clean” as we’re used to. Picking up where the last chapter left off: Kris and Laguna arrive in time to save Holy from Crow. Because of Kleene’s “Wind Snatch;” she is able to absorb the Ether Jammer’s signal, allowing them access to Ether Gear. But Crow is still in Overdrive– the ship is still on the defensive. But Crow still deems them a crew of “Monsters,” which leads to comedy.

But it also reminds me Holy of her little sister, Sara. And then she remembers- The Ether Gear’s back On. This Crow is melted, but more might still come after them. She asks them why they didn’t fire the cannon. They respond that they weren’t going to pull a trigger on a crewmate- even a temporary one. They may not consider her a friend, but Shiki does, and that’s all that matters. 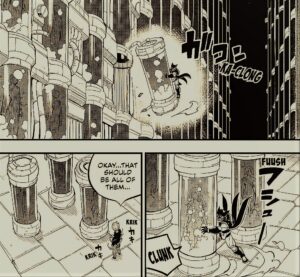 Meanwhile, in the core of Lendard; Weisz and co rescue a few pods of Mother’s Ziggy captured. Pino summons the Knight Gear for pick up, and they all take in what they’re seeing their mom’s again(or for the first time, in the case of Rebecca):

SPEAKING OFF: Shiki can’t believe his flipping eyes. He knocks Ziggy’s head off, and………. It’s Him. Ziggy Is Shiki From The Future. 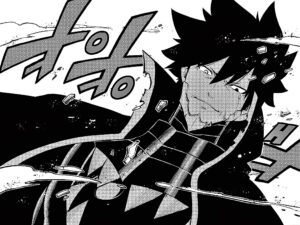 Ziggy Explains The Story– though not in full detail to Shiki. Thank God we’re behind the 4th Wall! 20,000 Year Flash Forward: Those 2 bots take the Humans back to the Planet Edens. Further examination reveals that yes- the girl is long dead. The Dude, however, is alive– It’s Shiki. He tries to tell them his name, but………. he can’t speak well. His attempt at saying his name just comes out as “Ziggy.”

……………. It’s been a few days since I last worked on this post. It’s acting weirder than the other posts I’m working on. I’ve kind of forgotten what I was going to say about this one. Maybe something with Holy? Or was it something to do with what Kleene is doing? I mean; I was wondering after the end of the last chapter how Kris and Laguna were using their Ether Gear in here. It makes perfect sense, honestly; she can use her wind to steal sh!t- why not Ether Gear Dampening Waves?

It was also a nice character moment for Kris and Laguna to say that about Shiki. It’s moments like that that makes people compare this series to One Piece– the fact that they’re willing to help a Potential Enemy because their leader told them “Treat Her As A Friend.” I still don’t trust Holy; I know that she has something planned. But…… Will She Stick to her own plan? 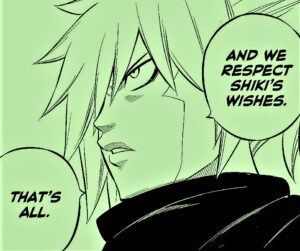 But of course; the BIG Thing From This Chapter: Ziggy Is Shiki From The Future. Now; because of how long it took me to get back to this post, I wasn’t able to get this out before leaks came out. I won’t spoil you on the next chapter- but I think that you guys can gather the moment that Ziggy was born: The Day Of The Aoi War, when Shiki was confronted with a choice.

The Shiki that we know chose to escape with his friends and survive, while Ziggy is the Shiki that refused to leave. And for that- he and Rebecca payed the Ultimate Price. I can not tell you how much I love what the end of that war did for Shiki as a character. The arc itself was…… “hit/miss” a lot of the time, but I really liked the choice that Shiki made. It showed us- and taught him- what he valued most. It was a tough choice, but at the end of the day; he had to make the best choice for his crew.

That’s all I got for the lot of ya today, boys and girls. Sorry it’s so short, but any longer would just feel forced an unnecessary. So I’ll stop here. Let me hear your own thoughts in the comments, and until the next post, all- Have A Fantastically Wonderful Day. By~~~~~e!!!! 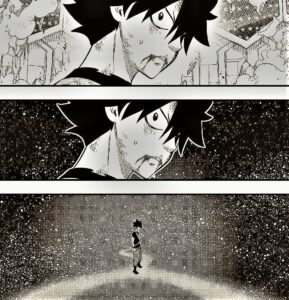