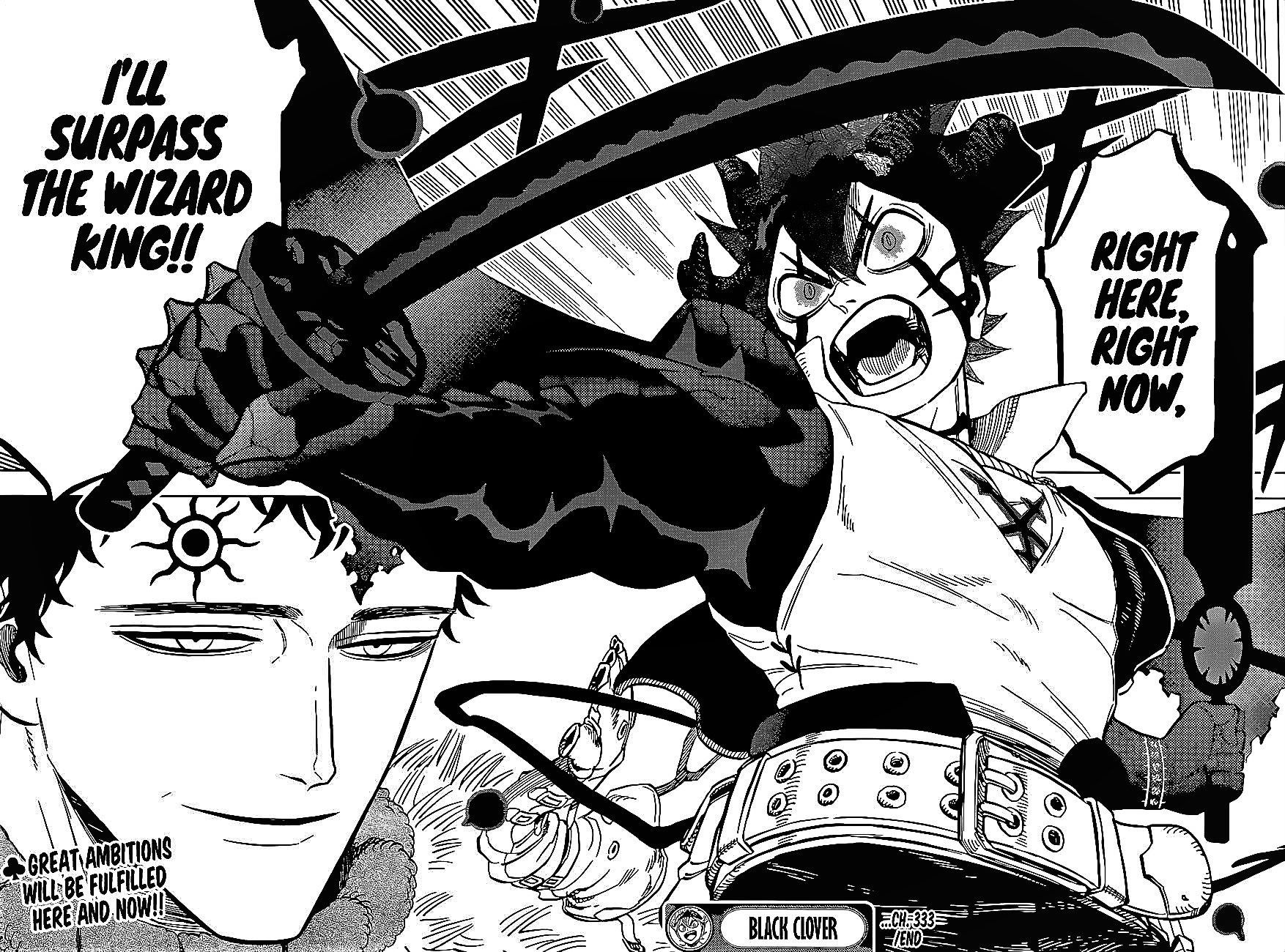 “Simple, but Effective.” That is the motto that “Black Clover” lives by. And it’s what I’ve chosen to go with for the title of this review. Because I earnestly couldn’t think of anything else. Not as smart as I try to sound in other posts. I’mma keep pluggin’ it til ya read it! Worked hard on that! Now; after having made his Final Proposal to Sister Lily, Asta is confronted by the Mastermind Of Masterminds- Lucius Zogratis!! Black Clover Chapter 333: “The World’s Savior And Its Flaw.” I really DO like the chapter titles Tabata comes up with.

We begin with an inner monologue from the perspective of Lucius: he was by far the most talented of his Family when it came to Devil Possession. And that might have been due to the fact that he’s a “unique being” with 2 Souls in 1 Body- himself, and Julius. Due to this; he wondered for a long time what it is that they should do with their power- with the power of the Supreme Devil Of Time, Astaroth. Through this power; Lucius was able to learn the “Path To True Peace.”

But in their shared Mindspace; Lucius saw that Julius had tried to betray him- that he was trying to stop his plan. So he…….. let’s say “sends Julius away.” All for the sake of the peace that he means to bring. And then we cut back to present day, in which Lucius comes to confront Asta. The boy notices right away that this may look like the Wizard King, but it’s not. And before he can even ask who this guy is- Time Is Froze in that vicinity.

Asta activates “Black Asta(No Complete with 4 horns and both wings),” and dispels the Frozen time for himself and Liebe. Lucius steps back to take in the power of Anti Magic, as Asta notes that he’s using the Wizard King’s magic- but on a much larger scale. Lucius says that he “took in Lucifero,” and introduces himself to Asta as the “Saviour Of This World.” Oh, and Julius is Dead. But he died for the cause of their “mission:” To Destroy Everyone And Remake Them With The Dark Triad’s Magic- equalizing the world. And when all is said and done; he’ll keep things “peaceful-” As The Final, Ultimate Wizard King. The only “kink” in his plan is also the “Ultimate Flaw” of the World: 1 Magicless Boy- Asta.

Asta tells him to shove the sh!t back where it came from(not in those exact words, obviously), and realizes what’s going on here immediately. So he vows to save Julius and stop Lucius’ plans. But Lucius warns them that he’s a fair bit stronger than Julius was. Guess Asta’ll just have to surpass Julius- right here; right now. He taps into Devil Union, and dispels to Zone. Thus; Black Clover Chapter 333 END!! Weekly Shonen Jump And Weekly Shonen Magazine Will Be On Break Next Week. This isn’t going to be easy………………

“Short And Sweet/ To The Point.” Perfect. Though it doesn’t leave me with very much to talk about- other than how far Asta has come with “Black Asta.” From a sort of wing and a Horn to 2 Fully formed wings and all 4 horns!! And yes; it’s simply Black Asta- you can see Liebe on his shoulder still.

Other than that; there would be Lucius’ belief that Asta is a “Flaw Of The World-” something that I feel like we’ve heard before. Because we have. I said in my “Defense Of Lucifero” post that the narrative of “High Class vs Low Class” had come to an end, and I stand by that. But it looks like that idea is still going to be a part of the story. Not mad about that; it HAD been one of the more prominent themes of a 333 chapter story for a long time. But I think the way that Lucius is saying it is fundamentally different from how everyone else was.

For everyone else; they more meant like “You can’t do anything” or “You’re not a good fit for this world so you should just role over and know your place.” But when it come to Lucius; he’s seeing Asta as more of an “Anomaly-” a “glitch in the matrix” that needs to be corrected. For Lucius; getting rid of Asta means that he’s “purifying” the world- the “gene pool.” And with the way that Zenon was treated growing up; I imagine that the Zogratis themselves weren’t on the “higher” part of society themselves- they seemed to be commoners, as well.

The last thing that I could possibly talk about is about Asta vs Lucius speculation. Asta dispelled The Time Bubble, which was casually bigger than what Julius had displayed. That’s enough to say that he might not be bluffing, but I also don’t think that Asta’s going to do too bad. Like; he still has Anti Magic, people! He may not automatically win because of it, but he does manage to get in some damage that might carry with Lucius for a minute- as we saw with Dante. What this effect will be is anyone’s guess.

And I don’t think that Lucius is the type to let something like that get him riled up; he’s “foreseen all of it-” it’s not like he’ll be surprised by it or anything. Unless, you know, Anti Magic is immune to Future Sight Magic because of its ability to defy fate. You know; Tabata could throw in a curve ball like that……..

…………… Yeah, that’s pretty much all. Let me know your own thoughts in the comments. It finally comes back, and then the whole Magazine goes on break; ain’t that ’bout a b!tch? Ah, well; these guys need time off. Tabata’s probably just getting back into the swing of things, anyway. And if he can keep delivering us peak every time, then it’s whatever. 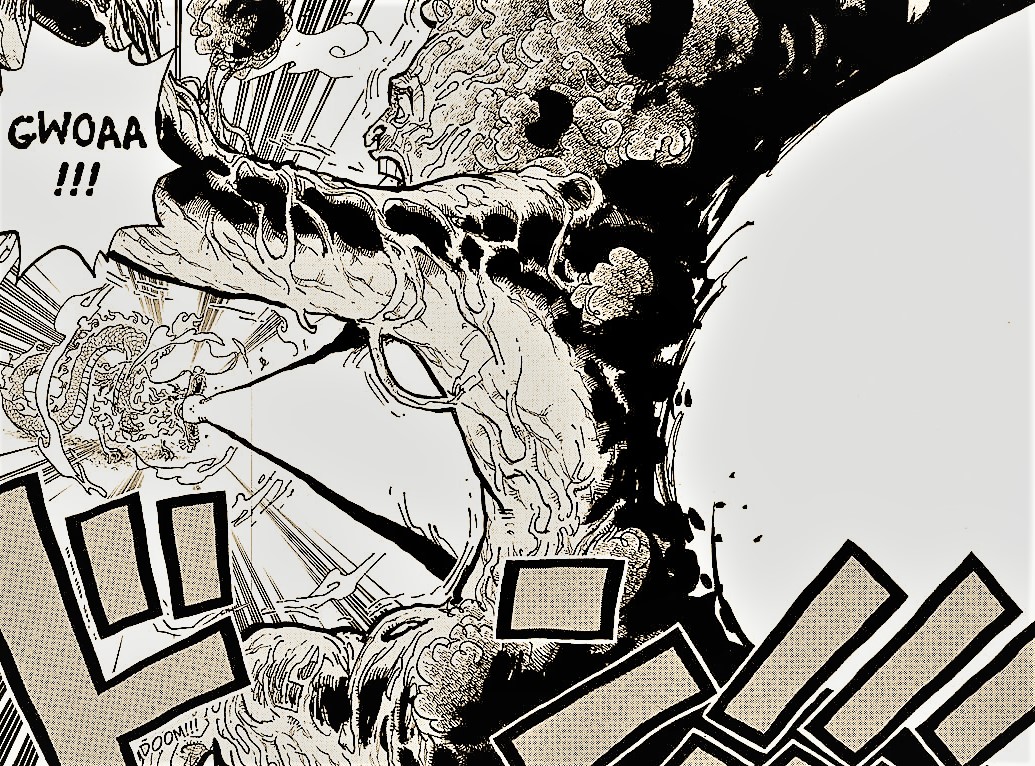 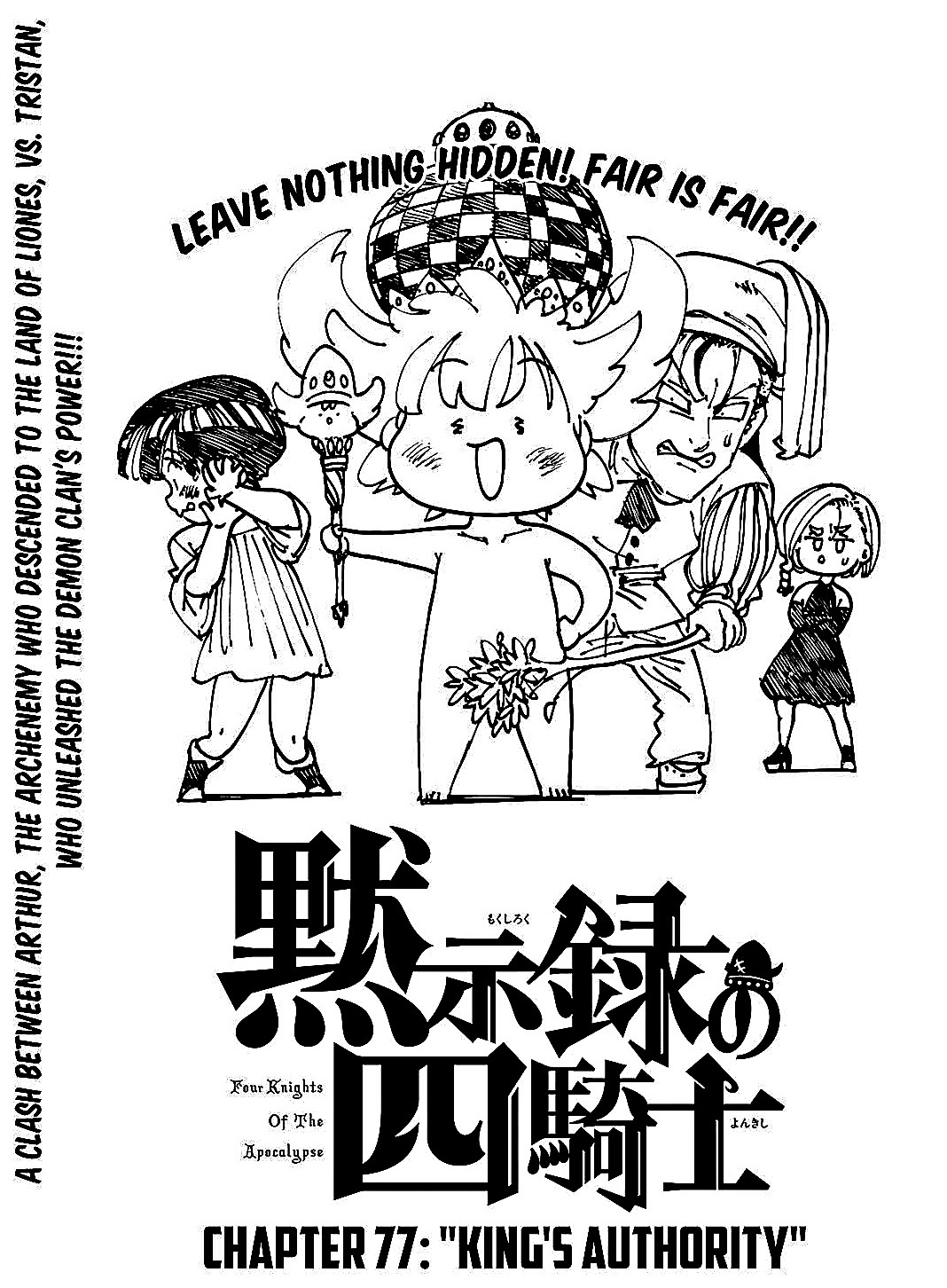 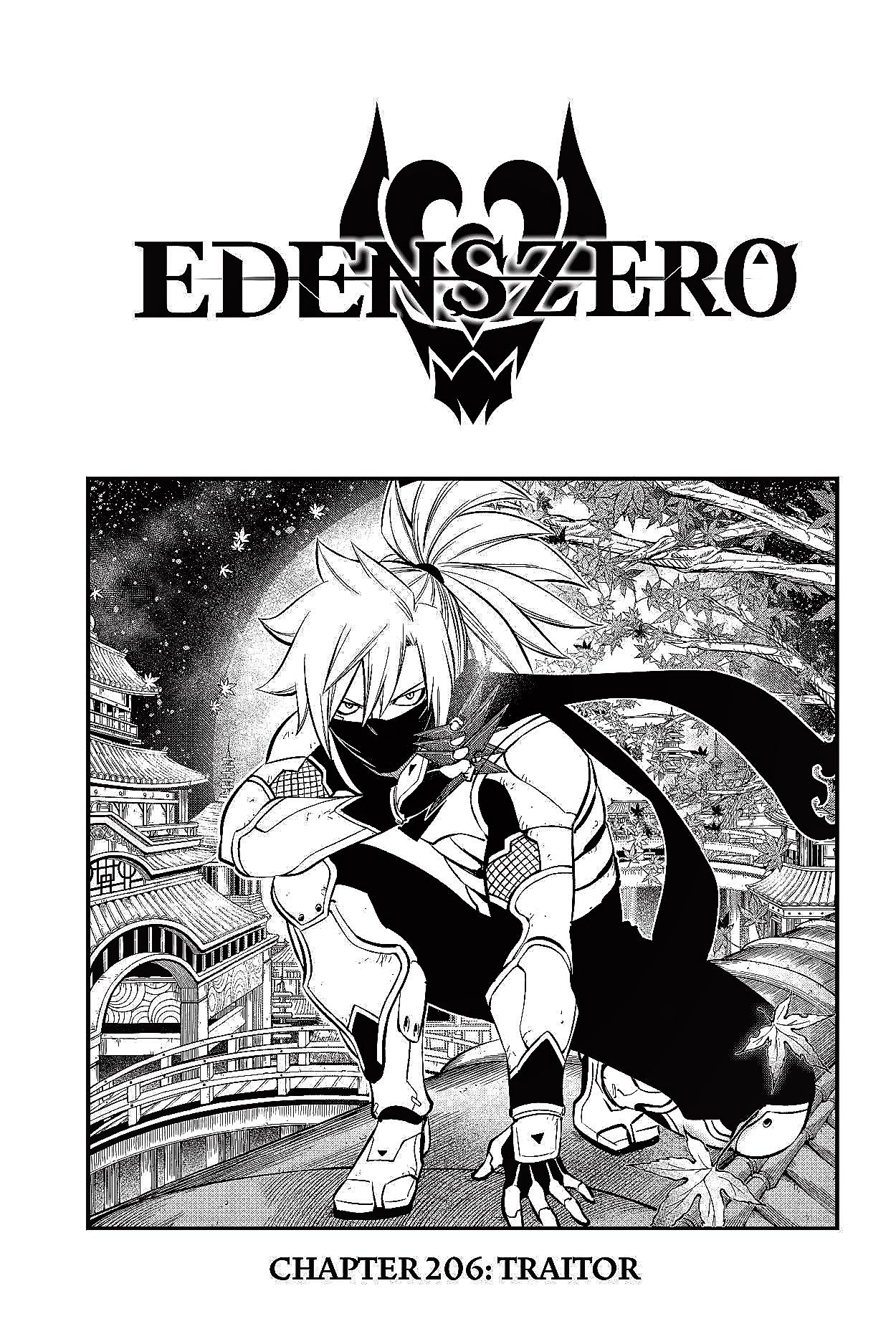